Welcome to the world of weird Japanese KitKat Flavors!

One of the best things about traveling is going to different parts of the world and discovering something new but similar, like KitKat. Wherever you hail from, I’m sure your country has a version of these chocolate bars.

In Japan, though, they take it a step further with their flavors. Like this one:

Sakura Japanese Sake, whatever that means. I guess you have to have something uniquely Japanese like sakura. I don’t really like the taste of sakura because sometimes it gets too overwhelming. Sake is good, though–but I digress. The point is, I haven’t tried this out yet: it’s a little too adventurous for me.

The most popular version is the green tea, of course. You can’t go wrong with that if you love green tea–which I do. This is also what I buy the most and give away when I go home. Friends and family have said that they like this.

In my opinion, I think Japanese KitKats are less sweet from the American version that I’ve known from childhood. Here in Japan, I think their chocolates are creamier and richer–not sweet like chocolates in the US. This is reflected a lot in their KitKat flavors.

You’ll find KitKats in standard, normal packaging at the chocolate aisle in grocery stores but they’re also sold at departments stores with more elaborate and expensive packaging. At the BicCamera in Sapporo station, you’ll find both. The packaging for the sake and wasabi flavors are prettier, but there are cheaper versions for the green tea flavors.

KitKat Japan also has their “adult” versions that are supposedly less sweet to match adults’ more refined palates. They’re called オトナの甘さ (otona no amasa). These chocolates are grainier in texture so they’re less smooth and creamy. I like them, though.

This year, KitKat also changed their packaging to reflect a more environmentally friendly policy, so these are made from paper–I totally applaud this move.

In October last year, a weird flavor came out that I’ve only seen once. I jumped at the chance to try something new:

Yes, that is purple apple pie flavor. This came out during Halloween, and for some reason Japanese people associate that color with the holiday. However, you’ll find the pumpkin and potato flavors out in full during this time. It was a lot sweeter than I expected but I couldn’t taste the apple in it.

And that’s one thing to also remember. Most of the time, these flavors come out seasonally so you won’t always be able to find them in grocery stores. They’ll be sold only for limited periods of time. Usually though, you’ll see them at the sale bins. I guess there’s a reason for that 🙂 These unusual flavors are hit and miss. Just keep that in mind when you go hunting for them in grocery stores.

Yeah, the one above was not a hit. It was too damned sweet. I like the sweet potato taste, but I couldn’t get past the sugar explosion.

Recently, though, I am obsessed with their nuts and cranberry series, particularly their ruby chocolate version. Ruby chocolate is supposed to be the “fourth” type of chocolate (white, black, and milk), but there’s some debate to that. I find it really delicious, though, but they’re expensive. So expensive that they only come in one stick and not the standard two.

This one is so good. I love the tartness of the berry flavor and the crunchiness of the almond nuts. They also have a regular milk chocolate flavored one:

And if you want to be more daring: yogurt flavor. 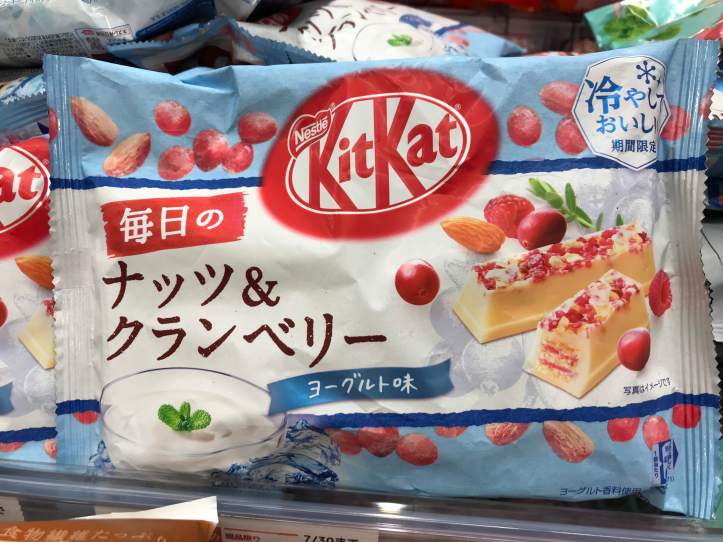 I think Japanese KitKats make good souvenirs to give away. They come individually wrapped so you can give the whole bag away or if you want, just in singles.

If you’re looking for weird KitKats, good luck on your hunt!

This site uses Akismet to reduce spam. Learn how your comment data is processed.